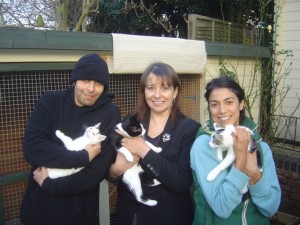 Teresa recently visited the Catcuddles Sanctuary in Howarth Road, Greenwich to offer her support for their campaign to promote responsible cat ownership.

Volunteers from the sanctuary showed Teresa around the facilities and explained how Catcuddles focuses on promoting the adoption of cats as companion pets, rescuing abandoned cats and kittens from the streets of London and rehoming unwanted cats.

The charity, which is entirely run by volunteers, also works to promote greater awareness of feline health and welfare issues across the community, with particular interest in promoting and helping with the neutering cats and advocating a ban of the online pet trade which leads to even more young stray and abandoned young cats.

“The volunteer team at Catcuddles really appreciate the time Teresa has taken to visit us and listen to our views on responsible cat ownership, and the urgent plight of abandoned and dumped cats in need of re-homing, which she understands needs addressing. Cats unfortunately are falling victim to today’s disposable mentality.”

“The sanctuary has had a record breaking year, re-homing over 250 cats and kittens in 2012. However, although this is great news, it shows the scale of the problem in the area due to neglect, abandonment and most importantly irresponsible attitudes to neutering. And our waiting list continues to grow. At any one time we normally have about 70 cats and kittens in the care of the Sanctuary and across our volunteer network of foster homes. On top of this January traditionally sees a surge in unwanted pets after the Christmas period.”

“I was delighted to be shown round the Catcuddles sanctuary to see the excellent work they do taking care of unwanted cats and finding them new homes. It’s really important as we head into the Christmas period that people considering giving kittens as a gift understand that they are a long-term commitment and responsibility.”

Consistent with the sanctuary’s promotion of responsible pet ownership and feline welfare issues, Catcuddles will remain open throughout the festive to rescue cats, provide adoption advice and arrange visits for people wishing to adopt a feline in the New Year. However, in order to prevent Catcuddles’ cats being given as Christmas presents, the sanctuary will pause adoptions between 20th December and January 2nd.

For further information on work of the Catcuddles, to adopt a cat, volunteer or donate to the charity please visit: www.catcuddles.org.uk