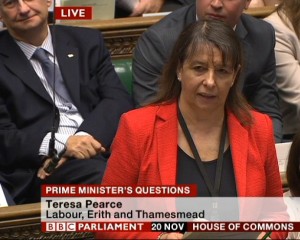 Teresa yesterday took the opportunity to raise the issue of the large redundancy pay-off awarded to Mr Tony Cotter, the former Chief Executive of Gallions Housing Association (GHA), with the Prime Minister in the House of Commons during Prime Minister’s Questions (PMQs).

“The housing association that is landlord to some of the poorest people in my constituency recently voted its chief executive a non-contractual redundancy pay-off of £397,000. Will the Prime Minister join me in condemning the board’s action and asking for it to be repaid and invested in much-needed tenant services?”

“I am very happy to look at the case the hon. Lady mentions, because some of these pay-offs really are completely unacceptable, and we need to make sure that local authorities properly take responsibility for stopping such high pay-offs. In terms of other parts of the economy, we are making sure that if people are re-employed, having taken these pay-offs, they have to pay back the money. I think that is vitally important, and perhaps it might apply in this case too.”

“Gallions Housing Association residents are understandably bewildered as to why the board decided to award Mr Cotter such a large sum of money, especially when many of them are struggling to make ends meet.

Last month, the Homes and Communities Association (HCA) found that Gallions Housing Association had breached their ‘serious detriment’ threshold for failing to comply with gas safety regulations, that placed tenants at risk. All things considered, it is not surprising that their governance rating was downgraded, and many tenants are not happy with the service they are receiving. The decision to award Mr Cotter such a large sum of money understandably raises concerns about the Board’s judgment.

I was very pleased to have the opportunity to bring this important matter to the attention of the Prime Minister, and I hope that he will keep to his word and look into this case. It is crucial that tenants feel that they are getting the service that they are paying for, and that they are living in a safe environment. I have contacted the Minister for Housing and Communities in order to arrange a meeting with him in the foreseeable future to discuss these matters further.”