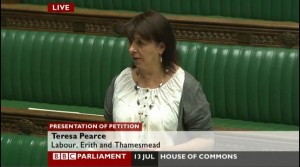 Teresa presents the petition to Parliament

Before Parliament went into recess, Teresa submitted a 1,440-strong petition to Parliament on behalf of campaign group Friends of Riverside Gardens Erith (FORGE). The petition opposes plans by Bexley Council to sell part of the Riverside gardens to developers, so that a tower block of flats can be built.

It also calls on the Riverside gardens to be designated as a town green and urges Communities and Local Government Secretary Eric Pickles to provide greater protection for green areas of importance to local communities in the Government’s Localism Bill.

“I was very pleased to present this petition to Parliament on behalf of members of the campaign group FORGE and the many Erith residents who oppose Bexley’s plans to build flats on the Riverside Gardens.

“The fact we collected nearly one and a half thousand signatures in just a few months shows how strong the level of support is. I know the petition has been brought to the attention of Bexley Council and I hope they will take note and listen to local people.

“The Government needs to give people more power to preserve green community spaces like the Riverside Gardens, which was gifted to the people of Erith and should remain in their hands. I look forward to the response from the Communities and Local Government Secretary to the petition.”

This entry was posted in House of Commons, Local events, News. Bookmark the permalink.