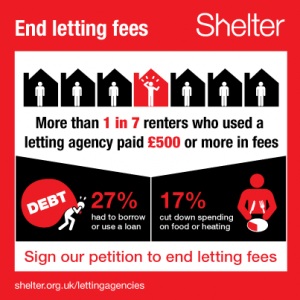 Almost one fifth of all families in Erith & Thamesmead are living in private rented accommodation and many of them have been subject to excessive fees and poor service from letting agencies.

Teresa has welcomed a campaign launched last week by Shelter to put an end to unfair letting agency fees charged to renters.

An investigation by Shelter revealed that renters are being hit by unfair fees of as much as £700 by letting agencies. Further research by Shelter has found that these charges are having a worrying impact on renters, squeezing disposable incomes and leaving many in debt and financial worry.

The result is further pressure on renters already struggling with rising rents. One in four people who have dealt with a letting agency in the last three years said they had to borrow money to pay for fees, while one in six reportedly cut down on food or heating to meet the cost of fees. The instability of the private rented sector means renters face these charges on a frequent basis.

“ I am seeing an increasing number of complaints about letting agencies and, although there are some good ones in Bexley and Greenwich, not all of them are of the standard that should be expected. Shelter’s research shows that this is a national problem and indicates how tough the rental market is on renters, at a time when people are already struggling to make ends meet. It is truly shocking that prospective tenants are expected to pay hundreds of pounds in fees, in addition to deposits and advanced rent, for a service that has been commissioned by landlords.

Given that young people and families are finding it increasingly difficult to get on the first rung of the property ladder, many people have no option but to rent. With good properties in short demand, they are often snapped up the same day as being put on the market, and prospective tenants have no option but to deal with the letting agencies chosen by their landlords.