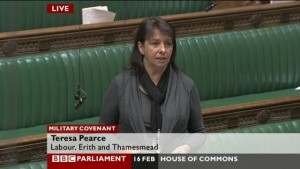 Teresa, a proud member of the Thamesmead Town and Abbey Wood Royal British Legion, has urged the Government not to follow-through with planned changes to public sector pensions that could leave war widows and veterans hundreds of thousands of pounds out of pocket.

During an opposition day debate on 16 February urging the Government to enshrine the Military Covenant in law, Teresa said the decision to link public sector pensions with the Consumer Prices Index (CPI), rather than the generally higher Retail Prices Index (RPI) previously used, would disproportionately affect members of the forces.

“Switching the pension index from RPI to CPI will be a huge blow to members of the armed forces, war widows and their families, because the nature of their service means they risk injury and rely on their pensions earlier than most other public sector workers.

“The Government sees the switch as a way to reduce the deficit, but the deficit is only temporary and this change will be permanent. It means veterans will have a year-on-year reduction in their pension – a 40 year old squadron leader will lose £300,000 by the age of 85 because of the change, which is simply not right.

“I oppose the switch to CPI for all public sector workers because I don’t believe the deficit should be reduced through a raid on public sector pensions. But our Armed Forces are also a special case because their service to their country requires huge sacrifices which should be reflected in a decent pension after active service.

“The deficit can be reduced through greater investment and a solid strategy for growth over time. Members of the Armed Forces and their families living in Erith and Thamesmead should not have to pay the price for the banking crisis in which they played no part. I urge the Government to abandon their damaging short-term thinking on the economy and stop this raid on the pensions of veterans.”

This entry was posted in News, Speeches. Bookmark the permalink.