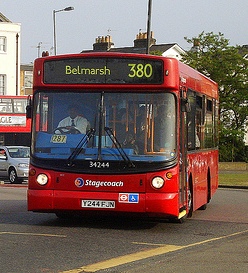 Teresa has welcomed news that Transport for London (TFL) is planning to increase the frequency of buses on Route 380 between Belmarsh and Lewisham at peak times.

Back in March, Teresa met the Deputy Chairman of TFL Daniel Moylan in Parliament to discuss a range of local transport issues. One of the areas she urged them to address was the overcrowding on Route 380 buses. The buses are frequently overcapacity at peak times because they are the sole mode of transport for many people on the Thamesmead Estate. Larger double-decker buses are unable to be used on this route because of height restrictions. Over the last few months TFL has been conducting capacity checks in response to Teresa’s concern and feedback from passengers.

These checks have shown that there is a need for additional capacity, and TFL now plans to run buses every 10 minutes instead of every 12 minutes, for departures from Belmarsh between 0730 and 830, and departures from Lewisham between 1630 and 1730, beginning in September.TFL also plans to replace 5 of the current fleet of buses used on this route with larger 60-capacity single-deck buses from another route later in the autumn.

Late last week TFL wrote to Teresa and other stakeholders to share the good news, asking for comments. Provided there are no problems the improvements should be in place in time for the autumn school term.

“This is great news for people on the Thamesmead Estate who need to travel at peak times. Overcrowding on buses on Route 380 has been one of the main issues raised with me since I was elected as the local MP.

“I’m glad that I have been able to speak to TFL and help make the case for these improvements. I hope this will mean getting to and from work and school will be a much better experience for people in Thamesmead who rely on these buses. I’ll be monitoring the changes once they are introduced to make sure they are making a real difference.”