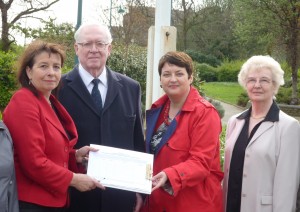 Teresa has welcomed news that plans to sell off part of Riverside Gardens to allow a block of flats to be built have been dropped from Bexley Council’s Erith Western Gateway Development Framework.

The planning document, formally adopted in January and published this week, describes plans to transform the gardens into a landscaped public park capable of accommodating civic events and festivals. Plans to build flats on the Riverside Gardens have been dropped from the priority list of developments that will be the first to emerge from the strategy.

The good news follows a concerted campaign by local community group Friends of Riverside Gardens Erith (FORGE) which was supported by Teresa. Last year Teresa worked with FORGE to collect signatures for a petition calling for the Riverside Gardens to be kept as a green open space for the community. Teresa submitted the 1440-strong petition to the House of Commons in July 2011.

“I’m really pleased that the Riverside Gardens will be kept as a green open space for the community for the foreseeable future. It’s a tribute to the hard work of Alec Tapper and Joan McCarthy from FORGE who have built so much support amongst local people to oppose the plans.

“However the door could still be open to build on part of the Riverside Gardens if market conditions improve, so we have to remain vigilant and be ready to fight to keep the green open space in the future.”