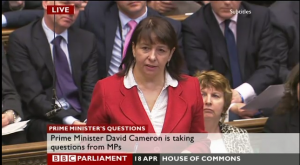 This week Teresa quizzed the Prime Minister on why the Chancellor was cutting staff from HM Revenue and Customs (HMRC) when his Budget will bring hundreds of thousands more people into the tax system and drastically increase workloads.

She asked the Prime Minister:

“This flawed Budget makes 230,000 additional pensioners pay tax and will bring 500,000 extra parents into the self-assessment regime because of tax on their child benefit, yet this week we have heard that 10,000 members of staff will be cut from HMRC. Is not the Chancellor so incompetent that he will not have the staff to deliver his own budget plans?”

The Prime Minister’s response, that the Government has increased staffing at HMRC to try to crack down on tax avoidance, raised a few eyebrows amongst those who have been fighting waves of redundancies at the Department and led to Channel 4 undertaking a ‘Fact Check’ on the Prime Minister’s comments, finally declaring them to be ‘fiction‘.

To read the full fact check just visit this link.