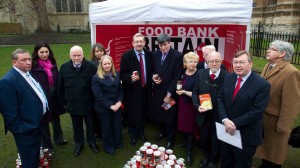 On Wednesday 26 February Teresa visited a Unite ‘pop-up’ food bank outside the Houses of Parliament, to draw attention to growing poverty and the reliance on food parcels in the UK.

People turn to food banks in times of desperation – usually because of an unexpected bill, or the miscalculation of welfare cuts, but more and more because of shrinking wages and rising living costs.

Teresa warned that further benefit cuts, due to impact from April 2013 on people both in and out of work, will force ever greater numbers to rely on emergency food support.

The pop-up food bank appeared as the Welfare Benefits Uprating Bill is being debated by the House of Lords. This Bill seeks to place a real terms cut on all benefits, by capping annual rises to a below inflation 1 per cent. Some 60 per cent of those households affected by this cap will be in work. 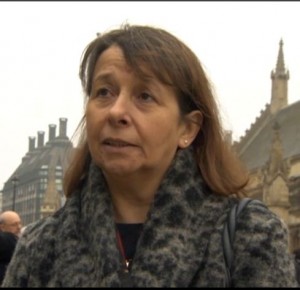 The influential Institute for Fiscal Studies predicts that as many as seven million working households will be hit by the uprating cap, by an average of £165 per year. These factors are set to significantly increase food and fuel poverty, leaving growing numbers of people reliant on food banks.

Speaking to BBC London News at the event, Teresa said:

“There are possibly a quarter of a million people this year who will rely on food banks, and many of those people are in work. I think there’s something wrong with the economic model in this country when people who work can’t feed their own families.

“The work carried out by food banks giving supplies to people both in and out of work is invaluable. They provide a lifeline to people in dire need. But it is appalling that this level of support is needed in 21st century Britain thanks to Government cuts.”

A clip of Teresa Pearce speaking to BBC London News is available here at the 13:46 mark.