Teresa backs campaign to give voice to people supported by benefits 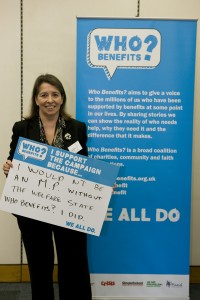 Teresa has given her support to a campaign which aims to give a voice to the millions of people supported by benefits at some point in their lives.

Polling by the campaign Who Benefits? has revealed overwhelming public support for the principle that benefits should be there for those who need them. 81 percent agree that ‘benefits are an important safety net to support people when they need help,’ while two-thirds (64 percent) agree that ‘we all benefit as a society when support from benefits is available for those that need it’.

Who Benefits? argues that the overwhelming majority of those on benefits really need the support, yet too often their voices are ignored, misrepresented or they are blamed for their situation.  The campaign has been launched by more than 70 charities and community groups brought together by The Children’s Society, Crisis, Gingerbread, Macmillan Cancer Support and Mind.

Teresa, who attended the launch of the campaign in Westminster, said:

“As a young mother, I had no option but to turn to the welfare state to help me and my small daughter survive. If I had not been able to claim benefits and get help when I needed it, I am not sure how we would have coped. I am fortunate today to be an MP, and my daughter is very successful, but I know that without that help when we needed it we would not be where we are now.

The point of the welfare system was always to help those in need, and that has not changed. What has changed is how we are told to view those who ask for help. Those who claim benefits are now often blamed for their circumstances instead of given the non-judgmental support they need to move forward, which is sad and damaging.

As well as my own experiences, I’ve seen first-hand how the vast majority of those supported by benefits really need that help, so it is great that Who Benefits? is helping to give them a voice.

People from all kinds of backgrounds need help from benefits at some point in their lives. I’d encourage them to support the campaign and share their own stories, so that the debate on benefits reflects their experiences.”

Who Benefits? is asking people to share their stories online.  A thousand people who have been supported by benefits have already shared their stories through the website and through social media with the hashtag #WeAllBenefit.