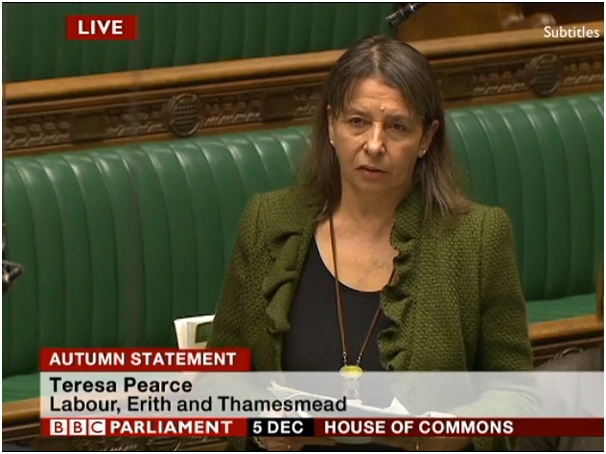 Teresa yesterday questioned the Chancellor of the Exchequer, George Osborne MP, about the housing crisis in London following his delivery of the Autumn Statement.

Following his delivery of the Autumn Statement, Teresa asked the Chancellor:

“There is a housing crisis in London at the moment. The autumn statement says that house prices grew by 9.4% in the first nine months of this year—and that is before Help to Buy comes in, which nearly all forecasters believe will increase prices further. Does the Chancellor believe that spiralling house prices are good for the economy?

“I made a point in my statement of saying that we want stable house prices and that we need more homes to be built. I know that that is what the Mayor of London also believes. We have taken steps to give the Bank of England powers to deal with asset bubbles as they develop. That, of course, did not happen five or six years ago, much to our cost. Specifically on the cost of London housing, the early Help to Buy statistics suggest that most of the families who have taken it up are from outside London and the south-east, and are buying properties worth on average £160,000. Help to Buy is therefore helping exactly those we want it to help: aspirational families who can afford a mortgage but cannot currently afford the very large deposit that the problems in our banking system have demanded of them.”

After leaving the Chamber, Teresa remarked:

“I asked the Chancellor about the housing crisis in London, and about forecasts predicting that the Help to Buy scheme is going to lead to house prices rising. I was very disappointed with his response. The Chancellor appeared to answer a completely different question, and did not address my statement at all.

The Chancellor is scheduled to appear before the Treasury Select Committee next Thursday to answer questions about the Autumn Statement, and I intend to press him further on this matter for answers.”

The purpose of the Autumn Statement is for the Chancellor to update MPs on the Government’s spending and taxation plans, based on the economic projections provided by the Office for Budget Responsibility (OBR).