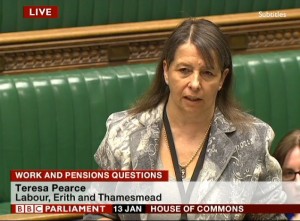 Teresa yesterday took the opportunity to raise the issue of the impact of the Under-Occupancy Penalty (Bedroom Tax) on carers during Work & Pensions Oral Questions in the House of Commons.

Teresa asked the Secretary of State:

“What assessment he has made of the effect of the under-occupancy penalty on carers?”

Esther McVey MP, Minister of State at the Department for Work and Pensions, replied:

“Live-in carers are provided for as part of the assessment of household need. An additional room for non-resident overnight carers is allowed in certain circumstances. Discretionary housing payment funding has been increased to £180 million for 2013-14 to help support vulnerable claimants to adjust to the reforms.”

“Many children grow up with separated parents, but I think we would all agree that joint parenting is in the best interests of the child. One of my constituents is a devoted father whose small son lives with him 50% of the time, but he now has to lose his son’s bedroom because the benefits system will accept only one parent as the “main carer”. Will the Minister re-examine that rule and consider an exemption?”

“The hon. Lady is right to bring this matter to the House, and such situations are always difficult, but the room would be allocated to whoever was the main carer of the child. In this instance, that is the mother and that is who we would be looking to. We would not be supporting two sets of rooms in two separate houses, as we are trying to get this housing policy right.

On leaving the Chamber, Teresa remarked:

“I was very disappointed with the Minister’s response, and I do not feel that she appreciates the impact this policy if having on many families and children.

Modern family set-ups are very diverse, and parenting can be split equally. It is ridiculous that a child who spends 50% of his or her time with both parents would be denied their own room in one of their homes because that particular parent is not considered the ‘main’ carer.

This policy is proving very disruptive and unsettling for children, and will inevitably impact the relationship both parents can have with their children. It is further evidence of how out-of-touch this Government is with the needs of modern families.”