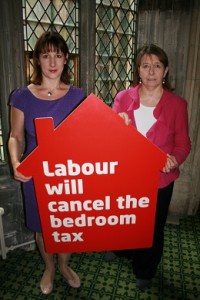 Teresa with Rachel Reeves MP, the Shadow Secretary of State for Work & Pensions, in the House of Commons today.

Today Teresa joined other Labour MPs to vote against the Bedroom Tax during a debate in Parliament.

The Bedroom Tax has caused hardship for hundreds of thousands of people across the country, costing low-income families an average of £700 a year. Two thirds of those hit by the Bedroom Tax have disabilities and 60,000 are carers. In London alone 48,489 people have been affected.

The Affordable Homes Bill, which aims to partly overturn this policy, was passed during a second reading in Parliament today by a vote of 306 to 231.

If this Bill is passed into law it would mean those people who cannot be found smaller properties would be exempt from paying the Bedroom Tax. It would also mean disabled people who require a spare room or who have had their homes adapted would be exempt, too.

“I have seen the huge pressure the Bedroom Tax has placed on families across my constituency. This policy hits the poorest hardest and is placing people in an impossible position.

Charging for an additional room or rooms is absurd when there are no properties available for people to move to. This means that they are forced to choose between heating, eating, or paying rent, and it is denying many hard-working people a decent quality of life.

I am extremely pleased the Affordable Homes Bill passed its second reading today in the House of Commons. Whilst the vote today did not abolish the Bedroom Tax it has highlighted the cruel and unfair nature of this policy, and is a move in the right direction.”