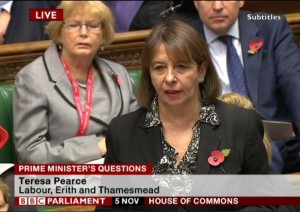 Teresa raised with David Cameron during the weekly Prime Minister’s Question Time (PMQs) the case of Sam Boon from Abbey Wood, who died in 2012 during a school trip to Morocco. He was taking part in a five-day trek.

The South London coroner’s report said that the trek leaders were “inexperienced” and “lacking in local knowledge.”

“In 2012 my constituent, Sam Boon, died while on a World Challenge trip to Morocco. He was 17. The coroner was so concerned at the multiple failings that she issued a section 28 report to the Minister for Schools to prevent future deaths. There are British safety standards, but they are entirely voluntary. Why is adherence to those standards not compulsory, so
that no other parent has to suffer like Mr and Mrs Boon?”

“I would like to look carefully at the case the hon. Lady has mentioned and write to her about it. It is important to ensure that safety standards are upheld, and to try to prevent tragedies such as the one she refers to.”

“I am very pleased that the Prime Minister is going to look into this matter. It is crucial that parents feel confident that their children are safe when they go on school trips abroad. It makes no sense that safety standards would be voluntary, especially when the consequences of them not being upheld are so devastating. The tragic death of Sam Boon is something we must ensure is never repeated. I look forward to receiving the Prime Minister’s written response.”