Teresa questions Prime Minister on NHS use of agency staff 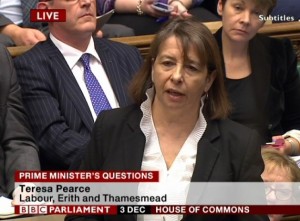 Teresa this week raised with David Cameron, during Prime Minister’s Questions (PMQs), concerns about the use of agency staff by the NHS, and how full-time nurses could potentially be employed instead.

“In the past four years the NHS has spent more than £5 billion on agency staff, about 20% of which will have gone into the pockets of the agencies rather than those of NHS staff. How many full-time permanent nurses would that have paid for?”

“I am disappointed as the Prime Minister did not answer my question. It is good that there are an increased number of nurses and doctors working across the NHS, but the fact is that the numbers are still not sufficient to meet demand.

The NHS is under-staffed, and many NHS workers are underpaid for the valuable work that they do. It is the case that agency staff are still being used in large numbers across the NHS, and this is unacceptable. This money should be used to employ more full-time nurses to ensure the consistency and quality of healthcare for patients.”