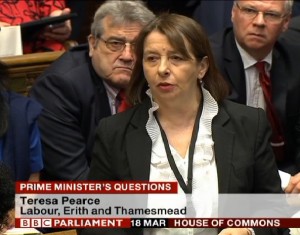 Teresa speaking in the House of Commons during PMQs.

Teresa this week raised with David Cameron, during Prime Minister’s Questions (PMQs), concerns about the length of time patients are having to wait to make appoints with GPs.

“One in four patients is waiting more than a week for a GP appointment, and some in my constituency are waiting two weeks. A third cannot even get through on the phone, but 23% of London GPs are due to quit the NHS in the next five years. Will the Prime Minister take responsibility for the increasing crisis in GPs on his watch?”

“What I would say to the hon. Lady is that nationwide we have 1,000 more GPs in the NHS. In her constituency, there are eight more GPs compared with 2010, there are 317 more GPs in the London area, and the Royal College of General Practitioners, which has often criticised the Government, has said that there has never been a better time to go into general practice.”

“I was very disappointed with the Prime Minister’s response. I did not ask him a question about the number of GPs working in the NHS. I specifically asked him to comment on the difficulties many of my constituents are experiencing when they are trying to make appointments at their local surgeries. He failed to answer. The number of GPs in the NHS is irrelevant if patients are not able to see them.

It is not right that people are not only having to wait more than a week to get an appointment, but that this is after many have struggled to even speak with somebody over the telephone at their local surgery. People get in touch with their local surgeries when they are concerned about their health and need medical attention. It is unacceptable that patients are being denied access to local healthcare as and when they need it.”