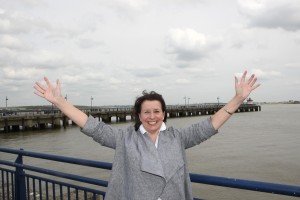 Teresa has picked her top tourist spots in her Erith and Thamesmead constituency for this week’s edition of local newspaper the Bexley Times.

“As local historians will know Erith played a part during the reign of Henry VIII (1509 – 47). Henry is believed to have spent a night here on his way to France. Part of his naval dockyard was founded at Erith, and his famous warship, Henri Grace à Dieu or ‘Great Harry’, was fitted out here in 1515.

“Erith has a rich and varied history that is rarely discussed or celebrated. There is a fascinating history of smuggling in the 17th and 18th century, as well as the more recently uncovered role in the East India Companies trading and I am sure that many people moving to the area do not realise that the reason there are roads around the “pom pom ” area called Friday and Crusoe is because the real life mariner Alexander Selkirk, upon whom Robinson Crusoe was based, came back to UK after his shipwreck arriving at Erith on October 14, 1711.

“I think Erith deserves a permanent building to house a visitors and education centre to celebrate the history or Erith and the river.”

Read more in the full article on the Bexley Times website.