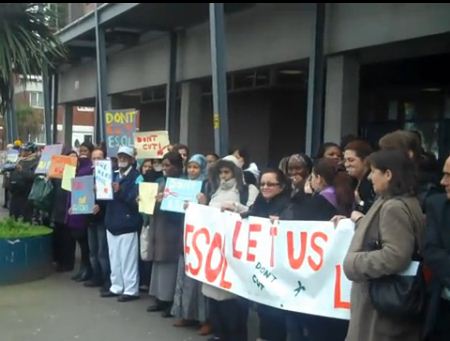 Teresa at the ESOL cuts protest in Greenwich

Teresa has welcomed a Government u-turn on plans to restrict full funding for English for Speakers of Other Languages (ESOL) courses to only those on ‘active benefits’ such as Job Seeker’s Allowance or Employment Support Allowance.

Under the Government’s original plan, people on ‘inactive’ benefits (such as income support, working families’ tax credit and housing support) taking English language courses would have their full fee remission removed from September and be required to pay half the total course costs ranging between £400-£1200. This would have priced many out of the courses, which help people integrate into their communities and boost their chances of getting a job. Research from the Association of Colleges suggested that 99,000 students, three quarters of them women, would have been affected by the change.

But Minister John Hayes has now said that Further Education providers will be given ‘some local discretion’ to provide free courses to students on other ‘inactive’ benefits for the 2011/12 financial year. This week the Skills Funding Agency has confirmed that eligibility for full funding will include ESOL learners.

Back in May Teresa visited Greenwich Community College (GCC)to support their protest against the Government’s cuts, taking up their concerns with the Minister through letters and parliamentary questions.

“The u-turn is only for 12 months though and it doesn’t look like any additional funding is being provided, so the campaign must continue. We all benefit when our neighbours can speak English, contribute to our community and get into paid work. I will continue to make the case that the Government should be doing the right thing by funding free English language courses and that this actually saves money in the long-term.”

“This decision is really good news. Learners on inactive benefits can now access education and training that will enable them to get jobs and really improve their prospects. Teresa’s support for our campaign has been tremendous and our learners and staff at the college are delighted at the outcome.”