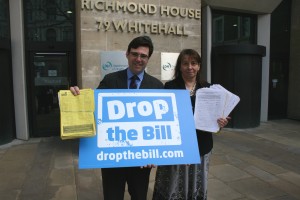 On Tuesday 20 March Teresa once again voted against the Government’s Health and Social Care Bill which will dramatically reorganise the NHS and allow for greater private sector involvement in the health service. Unfortunately, the coalition of Conservative and Liberal Democrat MPs in the House of Commons were able to push the Bill through and it has now passed into law.

The day before Teresa delivered a petition against Bill to the Department of Health in Whitehall on behalf of the Greenwich Pensioner’s Forum. Teresa was joined by Labour’s Shadow Health Secretary, Andy Burnham MP, to present the petition and to urge Health Minister to drop the Bill.  The local petition opposing the Bill contained over 1000 signatures and called for the NHS to remain a publicly owned and provided service.

“The Greenwich Pensioners’ Forum did a great job securing so many signatures against the Health and Social Care Bill. The petition really demonstrates the strength of local opposition to the Bill and to the Government’s plans for the NHS.

“I have consistently opposed the Bill because I think it is an unnecessary reorganisation that is focused on privatisation rather than improving patient care. I voted against the Bill at every stage in the House of Commons, but unfortunately the Conservative and Liberal Democrat MPs had the numbers to push the Bill through. I think it is a very sad day for our NHS.”