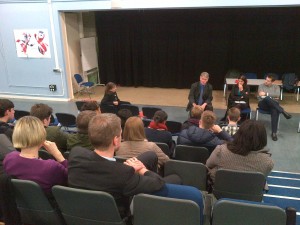 On Thursday 22 November Teresa hosted a debate for local young people at Bexleyheath Academy. Teresa organised the event as part of the Parliament Week campaign to get young people more engaged in politics.

Politics students from local schools listened to a debate by three speakers on the top three policies they would include in the next Queen’s Speech to be delivered by Government. The speakers were Wigan Labour MP Lisa Nandy, the National Chair of Conservative Future Ben Howlett and Jonathan Rooks who stood as a Green Party candidate in this year’s GLA elections. The debate was chaired by Jenni Tyler Maher, Head Teacher at Cleeve Park School in Bexley.

After the debate the audience voted for their favourite policy, with Lisa Nandy’s Living Wage policy the overall winner. After the vote there was a lively Q&A session amongst the speakers and the audience.

“I’d like to thank all the speakers and students for taking part in the debate. There were some great contributions from across the political spectrum and I hope the debate has prompted some more local young people to think about getting involved in politics and helping shape the society they live in.”

This entry was posted in House of Commons, Local events. Bookmark the permalink.