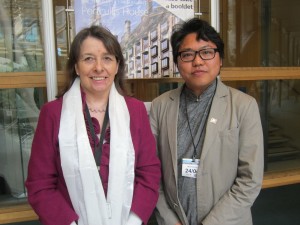 Teresa yesterday met with Tsering Passang, a member of Tibetan Community in Britain, to discuss his concerns about China’s continued human rights abuses in Tibet.

Mr Passang explained that the situation in Tibet is extremely distressing, and is characterised by continued human rights abuses.  He explained that the instances of self-immolation are increasing as the Tibetan people struggle to fight against their oppression.

He also explained that today is the 24th birthday of Gedhun Choekyi Nyima, the Panchen Lama, who was taken from his home at the age of 6-years-old. He has not been seen since this time, and nobody yet knows what happened to him.

“Human rights abuses in Tibet cannot be ignored by the international community. The introduction of oppressive policies, and the unfair oppression of legitimate protests, cannot continue. The increase in cases of self-immolation by Tibetan people in protest against their repression shows how desperate their plight is, and how crucial it is to peacefully resolve this situation as soon as possible.

I am very concerned about the welfare of Gedhun Choekyi Nyima, the Panchen Lama, who was taken by the Chinese authorities when he was just six-years-old. This means he could have been the world’s youngest political prisoner.

Today marks his 24th birthday, and neither he, nor his family, have been seen since the day he was taken. I think it is crucial that pressure groups, governments and other international bodies continue to press China to answer questions about his whereabouts.

The Tibetan people should be given all the support necessary to ensure they can enjoy the freedoms that we take for granted. Religious freedom should be a right, not a privilege.