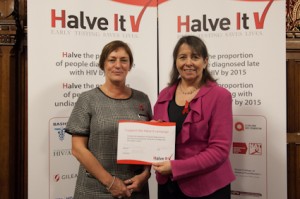 Teresa has pledged her support for Halve It, a national coalition campaign that aims to halve late diagnosis and undiagnosed HIV in the UK by 2015.

At the Halve It World AIDS Day parliamentary drop-in session yesterday, Teresa met with key members of the campaign’s steering group, including leading HIV clinicians, and CEOs of patient and policy organisations. She discussed with them the aims and achievements of Halve It to date, and the campaign’s compelling case for HIV to remain a public health priority in the UK. The event, which marked the 25th World AIDS Day, was attended by key parliamentarians from all parties.

Halve It is a coalition of advocates and experts that works with all levels of government and the NHS to reduce the proportion of people undiagnosed and diagnosed late with HIV, through public policy reform and implementation of good practice. The Halve It campaign focuses on the expansion of HIV testing services, on the basis that early testing of HIV saves lives and also results in substantial savings to the public health budget. Since its inception in 2010, the campaign has galvanised national and local cross-party support for HIV testing, and this year received the endorsement of the leaders of the Conservative, Liberal Democrat and Labour parties.

“In light of the figures released last week, it is clear that HIV should remain a public health priority in the UK, and also that HIV testing services must be made readily available for everyone. Early testing and diagnosis is crucial to ensure that people can get treatment to manage their condition as soon as possible.

Halve It should be commended for the important work they are doing and, as a supporter of this campaign, I will try to raise awareness of this issue whenever I have the opportunity to do so.”