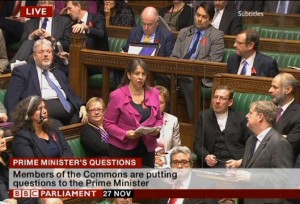 Teresa yesterday took the opportunity to question the Prime Minister in the House of Commons about rising business rates, at the same time as highlighting the important contribution small and medium-sized enterprises (SMEs) make to the national economy.

“In my constituency, as in many others, small and medium-sized enterprises are the engine room of the economy, so why are business rates rising by an average of nearly £2,000 in this Parliament?

On the subject of how to help business, how on earth can it be a good idea to say that you want to increase corporation tax as you go into the next Parliament? That seems to me absolutely mad—a new Labour jobs tax.”

“I did not feel that the Prime Minister answered my question as to why business rates have risen by an average of nearly £2,000 during this Parliament. The potential role small and medium-sized enterprises (SMEs) can play in driving economic recovery across the country should not be underestimated.

SMEs are important socially as well as economically, and they can make a major difference through job creation. I know a significant employer in my own constituency is an SME, and I have seen first-hand how they can boost local morale by offering jobs and apprenticeships. Business support measures are needed to encourage both the creation and survival of SMEs, and the Prime Minister should address this business rates issue as soon as possible.”