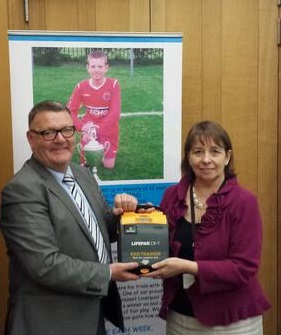 Teresa is backing a campaign for the introduction of legislation to make defibrillators compulsory in all public buildings, such as schools and sports centres, to help prevent sudden death in young people from Sudden Arrhythmic Death Syndrome (SADS).

This campaign, launched by The Oliver King Foundation, is aiming to increase awareness of SADS and to secure the installation of defibrillators in public buildings; to ensure staff are properly trained; and to give all young people over the age of 14 the opportunity to have an ECG check to make sure that their hearts are healthy.

SADS is the term used to describe heart conditions that can cause sudden death in young, seemingly healthy people, and usually affects people between the ages of 12 and 35. According to The Oliver King Foundation around 19 young people die from SADS every week in the UK, a number which could be reduced if defibrillators were made more readily available, and if more people were trained to use them correctly.

In the last 12 months, The Oliver King Foundation has placed over 200 defibrillators in schools, sports centres and workplaces across the country.

“Given that a reported 19 young people are dying due to SADS each week in the UK, it is important that we increase awareness of this condition and ensure that defibrillators are made readily available so that more lives can be saved.

It is almost a year since schoolboy Philip Lamin very sadly passed away after suffering a cardiac arrest whilst having a kick-about after school, and I am aware that his mother has been doing excellent work fundraising to try and purchase defibrillators for each of the 15 schools in Bexley.

What is clear is that increasing the availability of defibrillators in public places could prevent many premature deaths. It would give more young people the chance to live full and happy lives, something on which you cannot put a price tag.

It is not acceptable in this day and age that any young person should die for want of a defibrillator, and I commend the local work of Ms Lamin and the national work of The Oliver King Foundation for increasing awareness of this issue.”