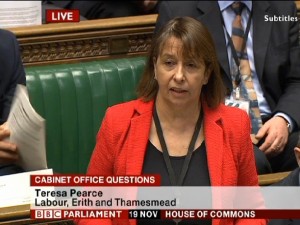 Teresa this week pressed the Minister to look at the impact of cuts to youth services during Cabinet Office Oral Questions (PQs) in the House of Commons.

“The National Audit Office has said today in a report on local government funding cuts that the Government fail to monitor the impact of funding reductions on local services. The report into the exploitation of girls in Rotherham cited youth workers as repeatedly having raised serious concerns—they were often the only people to do so—which shows that youth workers are often the only dependable adult in vulnerable children’s lives. Will the Minister assure me that he will monitor carefully the impact of local government cuts to youth services and the effects on child safety, and report his findings back to the House?”

“Obviously the Rotherham child sex abuse case is complex, and most of the responsibility for the matter lies within the Department for Education, but the hon. Lady makes a good point. It is important that we all learn lessons across Government, and the Cabinet Office is as keen as any other Department to do so.”

“I am very disappointed with the answer Mr Wilson gave to my question. I was clearly raising the issue of the importance of youth workers to many young people, but this appears to have been ignored. I specifically asked Mr Wilson if he would monitor the impact of Government cuts to youth services, and the impact this has on child safety, and he neither committed to doing so, nor did he say he would send me a response about this at a later date. I will now write to him directly to request that he answers my question.”