Teresa Backs Bill to Save our NHS 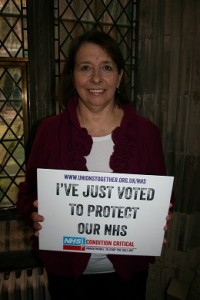 Teresa has voted for the new Bill to repeal the Tories’ new competition rules that drive NHS privatisation at the expense of patient care. She was contacted by hundreds of local residents urging her to vote for the Bill.

The National Health Service (NHS) (Amended Duties and Powers) Bill, introduced by Clive Efford MP, passed its Second Reading in the House of Commons today with a vote of 239 to 20.

This Bill aims to eliminate competition in the NHS, and would scrap the rules that force market tendering of services and that are seeing millions of pounds wasted on competition lawyers. Instead, it aims to ensure that patient care is once more prioritised.

The Bill will now move to Committee Stage where it will be scrutinised line-by-line by a group of MPs.

“I had no hesitation in voting for this Bill. The current Government has not just destabilised our health service; they’re holding it back from meeting the challenges of the 21st century as well.

This new Bill will end the creep towards NHS privatisation, bureaucracy and red-tape, and put patients back at the heart of the NHS. I am very pleased that we won the vote today, and I hope the Government will now act to make sure the Bill is enforced and patients are put before profits.

The NHS is one of our greatest achievements and our most important institution. It must be preserved for future generations, and the best possible health care must be universally accessible for all people.”