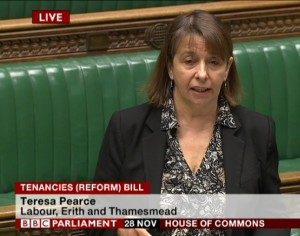 Last Friday, Teresa spoke out in the House of Commons on behalf of local tenants, who face revenge evictions by landlords if they complain about the condition of their properties.

The Tenancies (Reform) Bill, a Private Members’ Bill brought forward by coalition MP, Sarah Teather (Brent Central), would have offered protection for tenants against rogue landlords who seek to issue them with Section 21 eviction notices if they complain about the standard of their properties. The Bill received cross-party support and there was not a single vote against it.

Unfortunately, deliberate tactics by two Conservative MPs, who spoke for more than two and a half hours, effectively prevented further consideration of the legislation.

Teresa has, however, written to Vince Cable MP, the Secretary of State for Business, Innovation & Skills, to ask if the provisions on retaliatory evictions can be included in the Consumer Rights Bill when it has its Second Reading in the House of Lords.

During the Debate, Teresa said:

“I support the Bill because, in all contracts and business arrangements we enter into, we expect goods that are fit for purpose.

I met a constituent yesterday who is living in a house of multiple occupancy where no one can use the cooker because they get an electric shock every time they touch it, and no one will report the landlord because. . . .they are afraid. It is my job to speak up for those people and that is what I am doing today.”

“And politicians wonder why the public hates us. This Private Members’ Bill had the support of all parties. It was common sense legislation designed carefully to protect tenants from revenge evictions while at the same time maintaining the rights of responsible landlords. Yet two Conservative MPs decided to filibuster it into the long grass.”