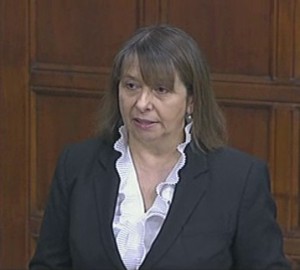 Teresa speaking in Westminster Hall during the debate.

Teresa challenged the Minister this week on behalf of disabled people in her constituency when she raised concerns about the hardship and anxiety caused by serious delays in processing claims for the new Personal Independence Payments (PIP).

Teresa called a Westminster Hall debate to quiz the Minister for Disabled People, Mark Harper MP, about the problems.

As evidence of the Government’s failure, she cited DWP’s latest official statistics which revealed that of 669,200 claims for PIP submitted since the launch of the scheme in April 2013, only 382,000 decisions/clearances had been made. Teresa spoke of the worry caused to 287,200 disabled and vulnerable people left waiting.

Teresa highlighted the fact that claimants are not being kept fully-informed of the progress of their claims, and that some people are having to wait over a year for a home assessment at a time when they are most vulnerable and ill-equipped to cope. She spoke of one of her own constituents, whose claim had been closed down altogether because DWP was calling an incorrect telephone number.

“The number of claimants affected by the delays is staggering. It is vital that the DWP takes on board the recommendations made by the independent review and takes action to urgently address the serious flaws in the PIP process.

The failures are causing a great deal of unnecessary stress to thousands of people, and this cannot continue. I am contacted regularly by constituents who have either not been informed about the progress of their claim, or have been waiting six months to a year to receive a home assessment. It is unacceptable.”