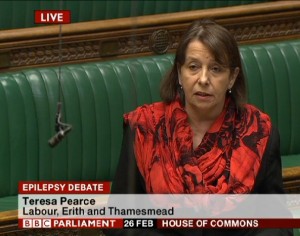 Teresa speaking during the Epilepsy debate in the House of Commons.

Teresa this week raised in the House of Commons the lack of GP support for women with epilepsy.

Teresa highlighted that there are risks for pregnant women with epilepsy if they take certain anti-epileptic drugs. The most common drug taken to control epilepsy is sodium valproate and although the possible side effects of that drug have been known since the 1970s women of child bearing age are still not sufficiently informed about their medication.

Teresa also drew attention to the work of FACSA, the Fetal Anti-Convulsant Syndrome Association, an organisation formed by mothers of children born with disabilities as a result of the anti-convulsant drugs taken during pregnancy. FACSA works tirelessly to raise awareness of this issue and to advise families who need support.

Teresa mentioned the fact that families were left devastated in 2010 due to the decision made by the Legal Services Commission to withdraw funding, which meant their case could not go to trial. Teresa spoke out about this at the time, and this week once again called on the Government to act to provide families with support and enable them to get the justice they deserve.

“I welcomed the opportunity to speak about this very important issue and to call on the Government to act. Epilepsy is a common condition, and we need to ensure that women with epilepsy are provided with the specialised care needed to ensure they are fully aware of the side effects of their medication.

Sodium valproate has been found to lead to the development of fetal anti-convulsant syndrome (FACS) when taken by expectant mothers. It is prescribed to women for a number of conditions in addition to epilepsy, and yet women are not being properly informed of its potential impact. This is a massive failing in the system, and is something the Government must address as a matter of urgency.

It is scandalous that women are not being provided with pre-conception counselling and information about their anti-epileptic medication. The science is available to help women with epilepsy have safe pregnancies, and yet many mothers are being denied this support.”