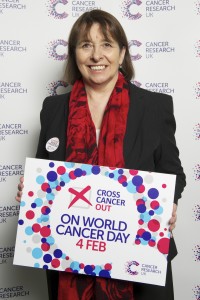 Teresa has met with Cancer Research UK to discuss how more people can survive cancer if it’s detected and treated early after new  figures for Erith & Thamesmead were announced on World Cancer Day (February 4th 2015). The figures show that one in two people will be diagnosed with the disease at some point in their lives.

There is therefore the urgent need to boost public health and NHS cancer services so they can cope with a growing and ageing population, and the increasing demands for better diagnostics, treatments, and earlier diagnosis.

“There are more than three people diagnosed with cancer every hour in London, and with this number set to rise, it’s vital that we detect cancer earlier across the UK and that the NHS is fit to offer all patients the best possible chance of surviving. I am concerned that the referral rates for cancer patients in Erith & Thamesmead are lower than the English average and I will be working with GPs and health partners to find out why that is.

I’m backing the Cross Cancer Out campaign because it’s clear that we all have a role to play in helping to beat cancer sooner. The political drive to beat the disease must match the pace of progress in research.”