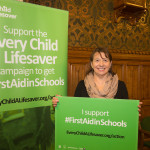 Teresa Pearce MP has launched the Every Child A Lifesaver campaign in support of her Private Member’s Bill to make emergency first aid education compulsory in all state-funded schools.

Speaking at the All Party Parliamentary Group on First Aid, Members of Parliament were briefed on the purpose of the Bill and the campaign.

On 20 November, the Emergency First Aid Bill will have its second reading in Parliament. Members of the public are being urged to visit everychildalifesaver.org/action to call on their MP to vote in support of first aid in schools.

“What the Bill aims to do is simple, straightforward and common-sense.

If we want to save lives, these numbers have to be higher.

The Bill doesn’t expect the impossible to suddenly become possible. Every one of us knows that not everybody can survive a serious accident or a medical emergency.

But we can give people the absolute best chance of surviving by equipping people with the skills to keep them alive while the ambulance gets to them and transform the next generation into potential lifesavers.”

The Bill has cross party support, and has been supported by St Johns Ambulance, the British Red Cross and the British Heart Foundation.