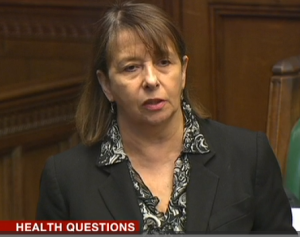 “A recent whistleblower revealed that the 111 helpline is in meltdown and at least two babies have died after staff failed to recommend treatment that may have saved them.

“Two weeks ago my own three-week-old premature granddaughter was very ill. Her parents called 111 and were promised that the duty doctor would call. He did not.

“They waited the whole long night and the next morning took her to A&E and she was diagnosed with meningitis.

“What exactly are you doing to fix the crisis in the 111 service?”

The Secretary of State responded:

“This is a very serious issue and I will happily look into it personally to make sure that a full investigation is happening into the incident you talk about, which clearly should not have happened.

“The 111 service has, I think, been an improvement on what we had before – it’s taking nearly three times as many calls as the previous service that it replaced – and around a quarter of those are referred to a clinician.

“But it’s clearly not perfect given the stories you have said, so I will look into the case you have raised.”

Speaking after the debate, Teresa said:

“I was pleased that the Secretary of State took my question seriously and admitted that there are problems with the 111 hotline.

“The poor service is affecting families across the country, and it is vital that the government act now to address this crisis and ensure that the service is fit for purpose.”