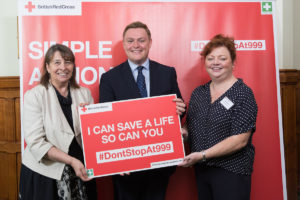 Teresa spoke on Tuesday at a British Red Cross event promoting its ‘Don’t Stop at 999 Campaign.’

New research from the British Red Cross reveals that up to 59% of deaths from injury could potentially be prevented if the public knew first aid. The research was launched in Parliament on Tuesday and revealed that whilst 93% will call for an ambulance if they find someone with an injury, first aid intervention of any kind was infrequent.

The Red Cross is calling for more opportunities to learn first aid throughout one’s lifetime, starting at school, but also through the driving test and public health initiatives.

The latest research follows the British Red Cross, St John Ambulance and British Heart Foundation’s ‘Every Child a Lifesaver’ campaign last year in support of Teresa Pearce MP’s Private Members’ Bill to make first aid mandatory in all state-funded secondary schools in England. Despite widespread support the Bill was ‘talked out’ and did not progress past its second reading.

“I was pleased to welcome this report which highlights the need for more opportunities to learn first aid.

“When faced with an injured person almost everyone is able to dial 999, but most people are unable to help any further. That initial assistance could be the difference between life and death, but many are just not trained or not confident to be able to administer basic first aid.

“I support the British Red Cross’ call for more opportunities to learn first aid be that at school, in your driving test or through public health initiatives.”

The British Red Cross helps people in crisis, whoever and wherever they are. We are part of a global voluntary network, responding to conflicts, natural disasters and individual emergencies. We enable vulnerable people in the UK and abroad to prepare for and withstand emergencies in their own communities. And when the crisis is over, we help them recover and move on with their lives. redcross.org.uk