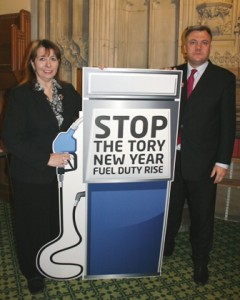 Teresa is calling on the Chancellor to cancel the Government’s New Year 3p per litre petrol tax rise that will hit local people hard when it comes into force on 1st January 2013.

Teresa has accused the Government for being out of touch with local people and the rising cost of living caused by the Government’s failing economic policies. As well as helping people on low and middle incomes, stopping the petrol tax rise would also help businesses and the flat lining economy.

“The price of petrol is now more than £1.36 a litre, a massive rise of 15p since the coalition Government came to power. People in Erith and Thamesmead are really feeling the squeeze from the Government’s VAT rise, which has added 3p to the price of a litre of petrol, on top of other policies such as tax credit cuts.

“Delaying January’s fuel duty rise, at least until April, would provide some much-needed financial relief for my constituents. Tory and Lib Dem MPs voted against a delay to the fuel duty rise earlier this month but I hope they will reconsider given the strength of feeling on this issue.”

Labour is calling on the Government to pay for the delay by clamping down on identified tax avoidance loopholes. For example, there is a growing problem with some employment agencies forcing workers to become employees of an umbrella company. They then falsely inflate the worker’s travel and food expense claims, reducing tax and national insurance, and pocket the avoided tax as profits.

HM Revenue and Customs has forecast that these schemes cost the exchequer £650m a year but more recent estimates have put it as high as £1 billion a year. Delaying the fuel duty rise until April 2013 would cost around £350m.