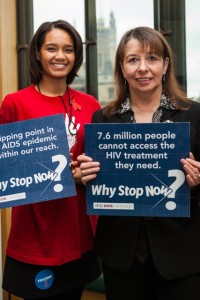 Teresa with Lotti Rutter of the Stop AIDS Campaign

Teresa spoke with activists about how far we have come in the HIV epidemic, with 8 million people now accessing HIV treatment, and AIDS-related deaths declining, from a peak of 2.2 million in the mid-2000s, to 1.8 million in 2010.

But Teresa also heard how far we still have to go, with 7.6 million still going without the life-saving medication they need, and joined with the UK activists in asking the government, for HIV and AIDS, Why Stop Now?

“We were delighted to talk to Teresa today about why the UK has to stick with its commitment to HIV and AIDS. We have come so far, and we also have a unique opportunity now to see the epidemic sent into decline by the end of the decade.”

“I fully support the Why Stop Now campaign this World AIDS Day. It is critical that investment in HIV and AIDS is sustained so we can save millions of lives. The Government needs to show exactly how it will ensure that all people living with HIV, including the 100,000 people living with HIV here in the UK, are reached with the services they need.

“The latest figures we have from 2009 show there is a high prevalence of HIV in Bexley and Greenwich according to Health Protection Agency standards. I will continue to work with organisations like the Stop AIDS Campaign to improve services for people with HIV and AIDS.”

The Stop AIDS Campaign is a coalition of 80 UK NGOs, faith-based and academic agencies, working at the heart of the global response to HIV and AIDS for 25 years. www.whystopnow.org www.stopaidscampaign.org.uk