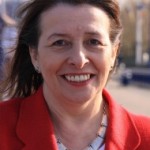 The Summit, which also included a tour of the improvement works at London Bridge, was participated in by senior executives from Network Rail, Southeastern, and Transport Focus, and was held to review the plan for delivering better services for rail customers on Southeastern routes travelling into London Bridge, Victoria, Cannon Street and Charing Cross stations.

“I am regularly contacted by constituents who have concerns with Southeastern rail services.

“The improvement works at London Bridge have caused disruption to many commuters across the South East through overcrowding, cancellations and delays.

“I was pleased to have the opportunity to stand up for commuters in my constituency again by raising their concerns directly with the Rail Minister and Southeastern, and to urge them to act now to improve the service. MPs from across the political divide joined together to speak with one voice about the problems commuters are facing.

“I am happy that the Minister has agreed to have a further meeting with MPs from South East London to look closer at the problems our constituents are experiencing.”