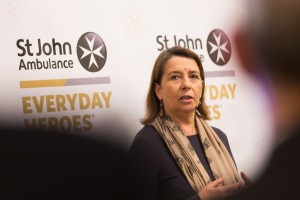 The awards are to celebrate exceptional people who have stepped in to help in an emergency or have worked extremely hard to raise money and awareness for first aid.

The winner, teenager Max Wilson – son of former Top Gear presenter, Quentin Wilson – saved his sister’s life with his quick thinking, following a serious accident involving a door which left her artery severed. Max called emergency services, stemmed the bleeding using a makeshift kit involving a dog lead, and directed paramedics to the house in France by reading directions on the side of a bottle of wine.

Teresa spoke about the need to teach emergency first aid skills to all school children, so that all children will know what to do in an emergency. Max puts his actions down to the training he received in first aid from the Combined Cadet Force in his school.

That’s why the campaign’s called ‘Every Child A Lifesaver’: because every child has the untapped potential to save a life.

The bill doesn’t expect the impossible to suddenly become possible. But we can give people the absolute best chance of surviving by equipping children with the skills to keep them alive while the ambulance gets to them.”

The Second Reading of the Private Member’s Bill is 20 November. Over 12,000 constituents have contacted their MP in support of the bill. Members from all parties have expressed support.