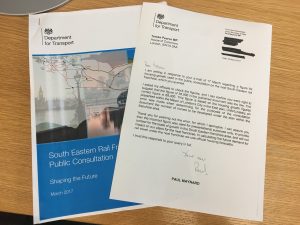 Consultation and Response from the Minister

Teresa has today slammed the flawed Department for Transport consultation on the future of the South East Rail Franchise.

The consultation document detailed the likely increase in population in South-East London and the impact upon rail services. However the number of new homes considered is significantly underestimated at 36,000. 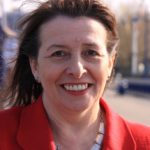 Teresa wrote to the Department for Transport for clarification regarding this figure, who acknowledged that the figure was too low and that the correct figure is around 68,400. The consultation documents have not been changed to reflect the admission of this error.

“We all know the historic issues of delays, overcrowding and cancellations on the current Southeastern service, which is why it was so shocking that in 2014 the Government renewed their contract, to the ire of commuters and rail users across the south-east. Since then these problems have continued, and with the contract due to end in 2018, there is an opportunity to bring the service up to scratch.

“Sadly this flawed consultation on the future of the service is based on incorrect information and massively underestimates the number of new homes to come in the local area and the number of people who will be using the service in the future. Failing to assess the service level needed accurately will only exacerbate the problems and leave rail users paying more and more for less and less.

“I am not confident that the future demand for rail services in South East London is being fully considered and consulted on, and if they have made mistakes on this, what else have they made mistakes on?”

The consultation document also makes a proposal to limit the choice of central London destinations for rail users, so that trains on some lines would only go to one central London station, such as Cannon Street.

Speaking about the proposal for trains terminate, Teresa said:

“This proposal would drastically limit the choice and options for rail users in my constituency and across the South-East. It would significantly increase journey times, and would lead to major problems of overcrowding and further pressure on already busy interchange stations like Lewisham.

“Losing direct connections to certain central London stations would be a major change to the service and I would encourage everybody to respond directly to the consultation on the Department for Transport’s website.”

You can respond to the consultation on the Department for Transport’s website here, or by email to BetterSouthEastern@dft.gsi.gov.uk, and sign the petition against the proposal here: https://petition.parliament.uk/petitions/190894