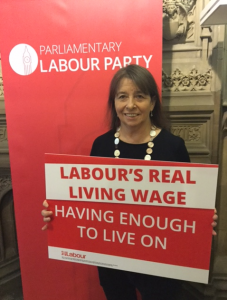 This Living Wage Week, Teresa has pledged her support for the campaign to secure a real Living Wage.

The Labour Party is committed to the Living Wage, and under the next Labour government everyone will earn enough to live on through the introduction of a statutory Real Living Wage – independent forecasts put this at over £10 per hour in 2020.

“It is a disgrace that low pay has been allowed to flourish in Erith and Thamesmead under the Tory Government. No one should work full time but still be in poverty.

“One of the greatest achievements of the government elected in 1997 was the establishment of a national minimum wage, lifting millions out of poverty. If you work for a living you should be paid a real living wage.”